The Better Care Reconciliation Act of 2017—what’s in the Senate’s new bill to repeal and replace Obamacare?

After a month of closed-door meetings, Senate Republicans emerged last week with a bill to repeal and replace the Affordable Care Act.

The legislation, introduced as The Better Care Reconciliation Act of 2017 (BCRA), is the Senate’s answer to the American Health Care Act (H.R. 1628), which the House of Representatives passed on May 4. 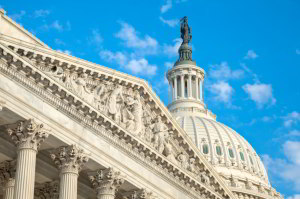 The Senate bill preserves much of the House’s work while making some key changes that could influence the federal budget and the legislation’s overall chances of passage.

For small businesses, the national discussion on health care policy has brought much uncertainty. Any changes will have a big impact on the realm of employee benefits.

In this post, we’ll cover the BCRA’s major provisions, its differences from the AHCA, what must happen to make it law, and how its passage would affect small businesses.

History of the BCRA

Since the House passed the AHCA in May, the Senate has taken up the torch of health care reform.

After individual senators expressed dismay with certain tenets of the House’s legislation, Senate leadership met privately to draft a new bill. On June 22, the BCRA was released.

Like the AHCA, the BCRA is a budget reconciliation bill. Under this process, legislation can be passed with a simple majority vote in the Senate.

This is key for health care reform. Republicans don’t have the majority necessary to pass a full repeal and replacement of the Affordable Care Act, which would require 60 votes in the Senate to overcome potential filibusters.

Under budget reconciliation, the BCRA must match or exceed the budget savings created in the AHCA. Its provisions must also focus exclusively on matters affecting the federal budget. Any provisions determined to be “extraneous” could compromise the bill’s status as budget reconciliation and subject it to a filibuster by Democrats.

The Senate parliamentarian, who is the body’s official advisor on the Standing Rules of the United States Senate and parliamentary procedure, makes these determinations.

What’s in the BCRA?

Much of the BCRA resembles the AHCA, though some provisions revise and restructure the House’s efforts.

Key provisions of the BCRA include:

We’ll go over each BCRA provision and, when applicable, how it compares with what’s in the AHCA.

Removing the employer and individual mandates

Like the AHCA, the BCRA eliminates the employer and individual mandates by reducing the penalties imposed under these provisions to zero. This would be effective for both mandates beginning retroactively in 2016.

The BCRA does not, however, include the 1-year, 30 percent late-enrollment fee present in the AHCA. This fee would have allowed insurers to add a 30 percent fee to the premium of any applicant with a coverage lapse of more than 63 days during the past 12 months.

The BCRA maintains the premium tax credits created under the Affordable Care Act, but limits eligibility and credit size.

Under the ACA, anyone earning up to 400 percent of the poverty level is eligible for a credit. The caps don’t vary by age, and the benchmark plan is a Silver plan with an actuarial value of 70 percent. Enrollees pay an average of 30 percent of their health expenses through cost sharing.

The AHCA, meanwhile, ties subsidy levels to age and family status only, beginning in 2020. The value of the credits would begin to phase out at $75,000 for individuals and $150,000 for families.

For a more detailed comparison of tax credit provisions in the ACA, the AHCA, and the BCRA by region, check out the Kaiser Family Foundation’s interactive map.

Like the AHCA, the BCRA would repeal the ACA’s small business tax credit beginning in 2020. Additionally, small businesses that purchase a health policy covering elective abortion would not be eligible for the credit in 2018 or 2019.

The AHCA allows states to apply for waivers exempting them from some of the ACA’s requirements, including essential health benefits and community rating.

Under the AHCA, states could apply for waivers to:

The BCRA also allows states to request waivers, though not from community rating. Instead, the Senate bill allows waivers for the following regulations:

In their applications for these waivers, states need to include a “description of alternative means” for “increasing access to comprehensive coverage, reducing average premiums, and increasing enrollment.” However, the only standard for waiver approval is that the waiver must not increase the federal deficit.

If this is found to be the case, the BCRA states that the U.S. Health and Human Services Secretary “shall” approve the waiver.

The BCRA largely replicates the AHCA’s establishment of the Patient and State Stability Fund, a federal high-risk pool that would be in effect from 2018 to 2023. The funds would be given to states in an effort to reduce premium and out-of-pocket costs for people facing a premium hike because of the effects of the waivers.

The funds would also be available to insurers who face large losses operating on the individual market.

The BCRA also includes an additional $2 billion for fighting the opioid epidemic.

The BCRA keeps all the provisions from the AHCA relating to health savings accounts. These include:

The BCRA replicates the AHCA’s rollback of several ACA taxes. These rollbacks affect:

Both the AHCA and the BCRA ends the Medicaid expansion enacted under the ACA, which extended the program from those making 100 percent to those making 138 percent of the federal poverty limit. While the AHCA would begin ending funding immediately, the BCRA phases out the expansion more slowly.

Under the BCRA, federal funding for Medicaid would be phased out between 2021 and 2023. Additionally, eight states would have a trigger clause, meaning that if the federal matching rate declines below the ACA-promised rates, the expansion would go away immediately.

Additionally, the AHCA and the BCRA would alter how the federal government dispenses Medicaid funds. Instead of continuing as an open-ended entitlement, states would receive a per-capita allotment of money. States would also have the option of receiving a lump sum toward Medicaid each year as a block grant, in return for more flexibility on how to administer the program.

The BCRA would also cap overall federal spending on Medicaid, with the cap adjusting annually to reflect inflation. Through 2025, the bills would adjust the cap based on the consumer price index for medical expenses (CPI-M)—a measure of how rapidly medical costs are expanding.

Beginning in 2025, however, the BCRA would change the formula to fund Medicaid based on the consumer price index for urban consumers (CPI-U), a measure of how rapidly all costs are rising. This is a traditionally much lower level of growth and would mean more restrictive growth for Medicaid funding.

Finally, like the AHCA, the BCRA suspends Medicaid reimbursement to Planned Parenthood for one year.

Under the AHCA and the BCRA, participants would no longer need to determine whether their HRA allowance makes their policies affordable. Instead, they would only need to ensure their tax credit is reduced by the amount of their HRA allowance.

Additionally, the BCRA expands the list of items reimbursable through QSEHRA funds to include over-the-counter drugs obtained without a doctor’s prescription.

Next steps for health care reform

The BCRA must pass through several political and regulatory hurdles to become law.

First, the budget reconciliation process requires that the Senate bill save the federal government as much as or more than the House bill.

According to the Congressional Budget Office (CBO)’s score of the AHCA, the House bill would reduce the deficit by $119 billion over 10 years. While the BCRA preserves many of the AHCA’s provisions, certain tenets of the law could lead to lower total savings, complicating the reconciliation process.

Additionally, provisions like the defunding of Planned Parenthood could be classified as extraneous by the Senate parliamentarian.

What’s more, at least four conservative Republicans have come out against the BCRA and the House Freedom Caucus has raised concerns that the Senate bill does not preserve the AHCA’s more strident state waivers.

More moderate legislators are also concerned over both bills’ cuts to Medicaid.

It’s too early to give a prognosis on the BCRA, perhaps, but it does seem to face an uphill battle to passage.

The BCRA and the AHCA contain several items that could affect small businesses.

Both bills eliminate the employer mandate, which would put small and large businesses on an equal playing field. Neither category would be required to offer employees health insurance, and more businesses would be likely to send employees to the individual exchanges.

Both bills also eliminate the small business tax credit. Some aid is given to small business employee benefits, however, by enhancing the value of HSAs and simplifying the process by which premium tax credits are coordinated with QSEHRAs.

While it’s an open question whether Republican health care reform would benefit small businesses, it’s certain that any bill would alter the benefits landscape. Small businesses would do well to pay attention to policy changes like these as they develop over the coming weeks.