Medicaid is the nation's health insurance program for low-income individuals and families. Started in 1965, it is jointly administered and funded by the federal government and states. The federal government sets basic guidelines. The states have broad authority to modify their Medicaid programs as they see fit, as long as they meet federal guidelines.

ACA Medicaid Expansion - What is it?

The Affordable Care Act (ACA) called for a nationwide expansion of Medicaid eligibility, set to begin in 2014. Under health care reform law, nearly all U.S. citizens under 65 with family incomes up to 138 percent of the federal poverty level (FPL) ($15,415 for an individual or $26,344 for a family of three in 2012) will now qualify for Medicaid.

So, for the first time, low-income adults without children will be guaranteed coverage through Medicaid in every state without need for a waiver, and parents of children will be eligible at a uniform income level across all states.

The Congressional Budget Office (CBO) predicts that 11 million Americans will gain coverage by 2022 through Medicaid Expansion.

So, while Medicaid expansion was originally mandatory for states, now it is optional. While some states might not participate in the expansion, given the recent Supreme Court decision, most states are predicted to eventually expand their programs. 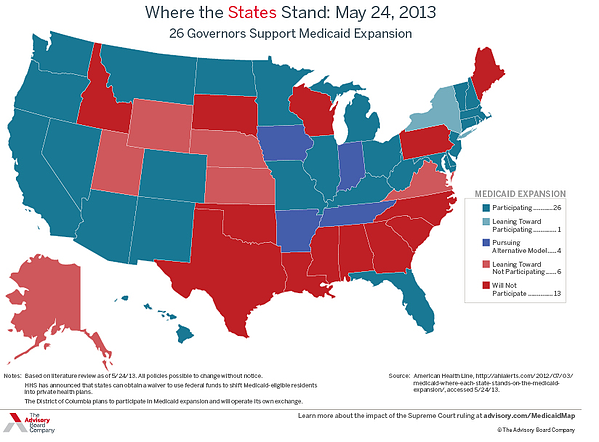 ACA Medicaid Expansion - Who will Fund it?

The federal government will fund the majority of the costs associated with ACA Medicaid expansion. For the "newly eligible population" (anyone not previously eligible in their state), the federal government will cover 100 percent of costs in 2014-16. Going forward, it will always cover at least 90 percent of the costs of the newly eligible population. States will continue to receive their standard federal contributions for "traditionally eligible" populations. This amount is different from state to state, and averages less than 60 percent.

To summarize, here's an infographic on ACA Medicaid Expansion summarizing the decision facing each state: