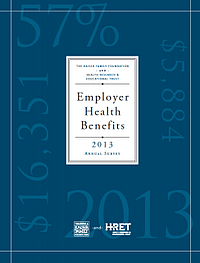 The 2013 survey included 2,067 randomly selected public and private firms with three or more employees. Surveys were completed from January to May 2013. Of those surveyed, 1,622 of the 2,067 firms that completed the full survey also participated in either the 2011 or 2012 surveys, or both. For more information on survey methodology, see KFF's website. 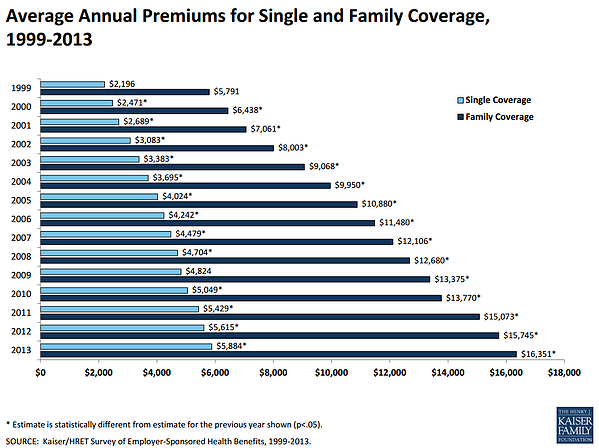 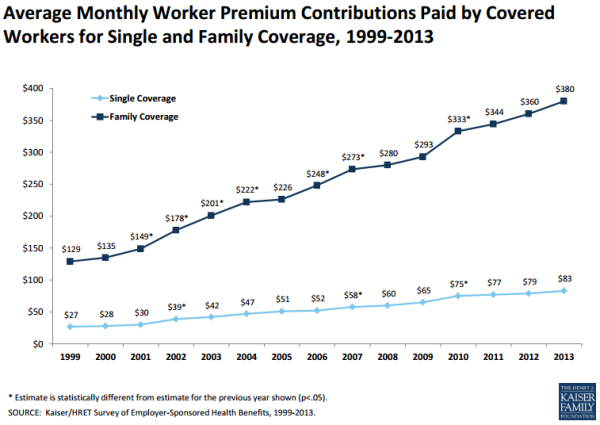 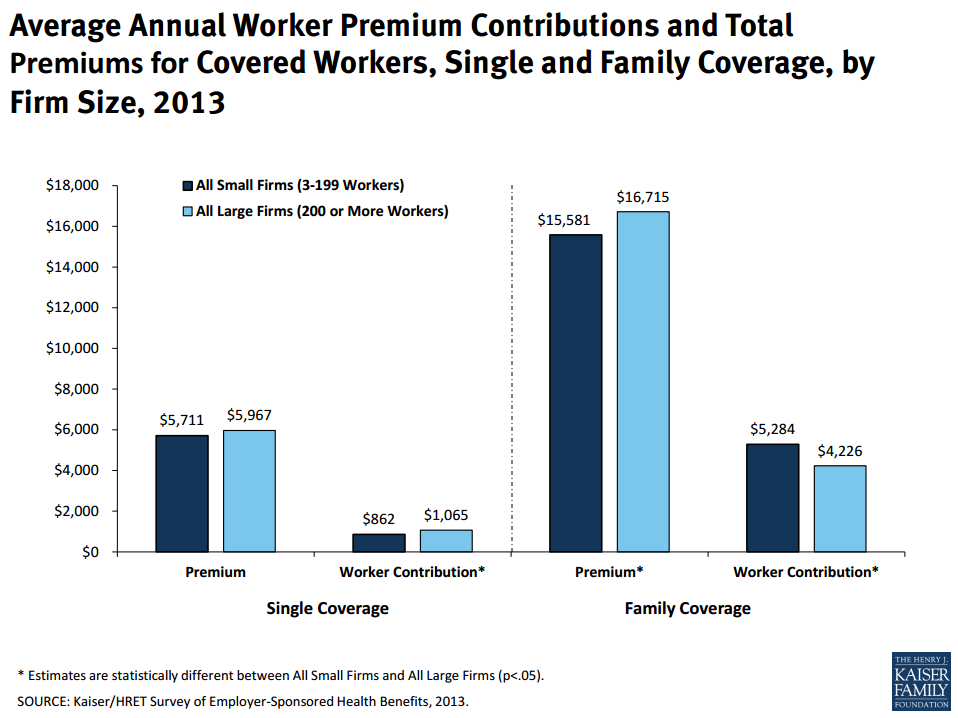 According to the survey, nearly all (99%) of large firms with 200+ employees offer health insurance to their employees. As the size of the company gets smaller, the employer is less likely to offer health benefits.

Between 1999 and 2013, the rate of firms offering health benefits with 200 or more employees has stayed consistent at 97% or higher. However, because the United States is dominated by small firms (98% of firms in the U.S. have less than 200 employees), the overall offer rate is largely determined by the changes in small firm health benefits offerings. 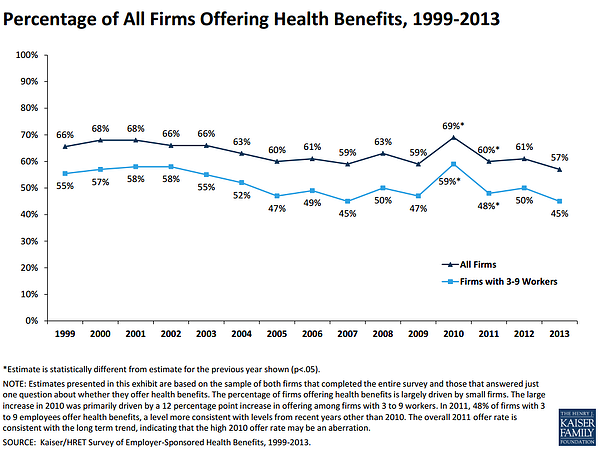 The wage, age, and employee status of workers plays a role in probability a company will offer health benefits. 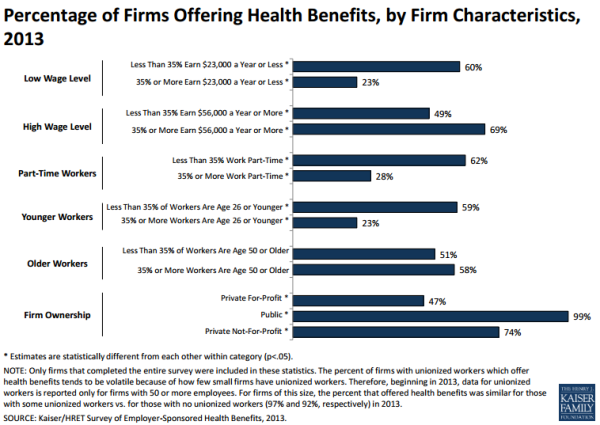 According to the survey, 149 million Americans are covered by employer-sponsored insurance. Of these, 62% of workers are covered by health benefits through their own employer.

Reasons that employees may not be covered by their employer include:

80% of Eligible Workers Will Opt for Coverage if Offered

Of employees that are offered health benefits and are eligible, ~80% opt for coverage. 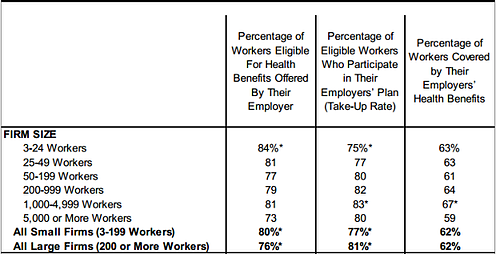 PPO Plans Remain the Most Popular, But Big Shift to HDHP

Conventional and HMO plans have become a less popular choice for employers in the last decade, while HDHP/SO plans have been on the rise. This is largely due to cost containment. 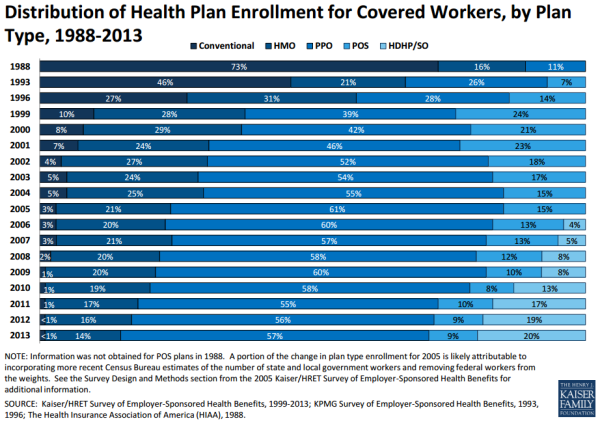 HDHP/SO enrollment has significantly increased in the past years. As of 2013, 20% of covered workers are enrolled in a HDHP/SO. This includes high-deductible health plans offered with an integrated HRA or HSA. 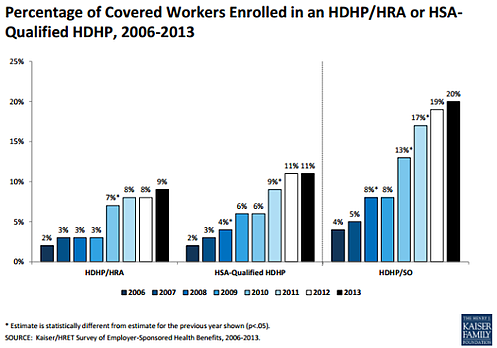 54% of Firms with Health Benefits Have a Grandfathered Plan

See also: What is a Grandfathered Health Insurance Plan? 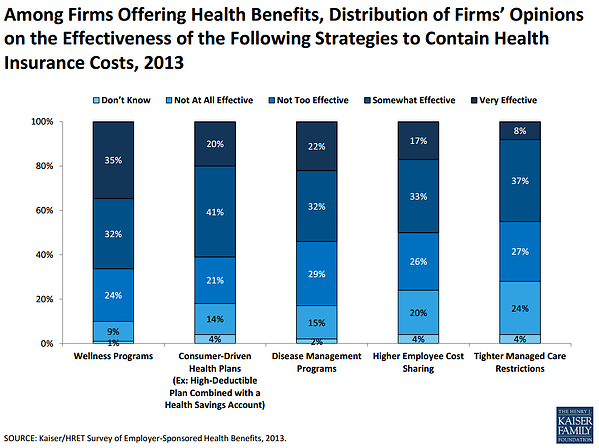 What do you think of the 2013 employer health benefits survey? Join the discussion by sharing a comment below.