The Affordable Care Act was signed into law almost 11 years ago, but there’s still confusion about how health insurance premiums are calculated. Health insurance is famously difficult and confusing to shop for, and our support team is constantly getting questions about which plan someone should choose.

We want to help clear things up. Read on to learn how your health insurance premium is calculated and what role your age plays in the calculation.

What can be used to determine your premium

Your age is one of the few factors that individual and small group health insurance companies can use to charge you a different premium than someone else, and it’s also the most impactful. The others are:

Some factors that aren’t allowed to be used to charge you a different premium amount are:

In an insurance company’s eyes, your age helps estimate how much you’ll use your plan. Since they pay money when a customer uses their plan, it makes sense to charge people more if they are more likely to use their plan and less if they aren’t. The extra money in premiums helps pay for the extra healthcare older customers are more likely to need.

But there’s a limit to how much more they can charge you based on your age. Federal rules were put in place to make sure insurance companies weren’t able to price gouge older adults to cover the increased costs to insure them, leading to higher numbers going uninsured.

The rule states that anyone 64 or older cannot be charged more than three times the base rate, which is the premium for a 21-year-old. Children under the age of 21 are only charged a fraction of the base rate since they’re less risky. 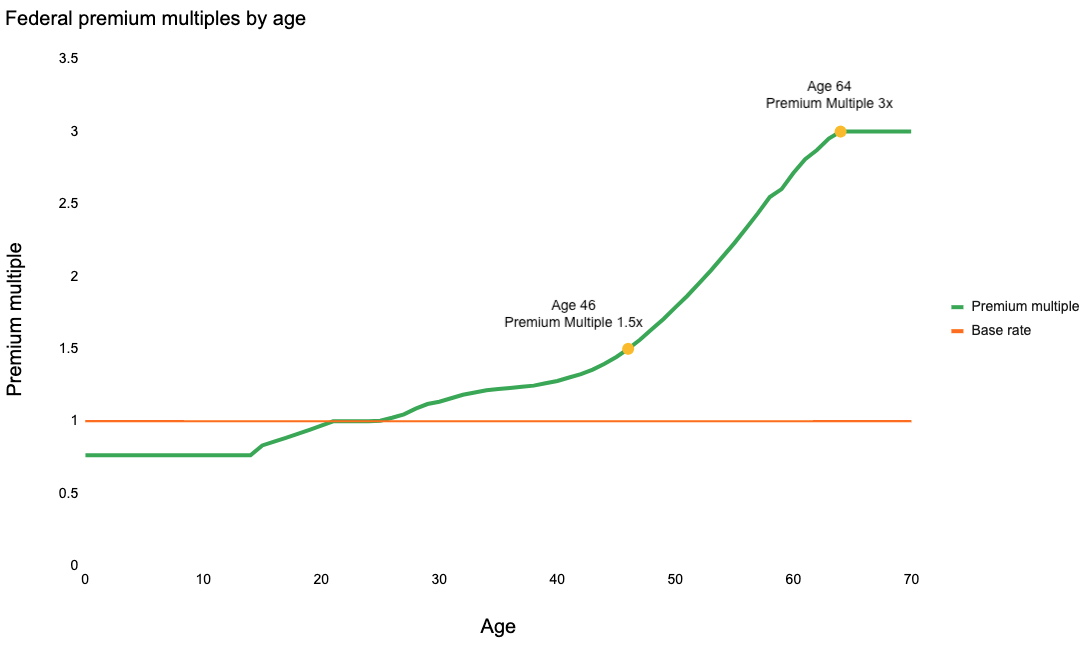 As you can see from the graph, premiums start to exponentially increase once you hit your mid-forties. At 46, insurance companies can charge you 1.5x the base rate. From there, it only takes 18 more years to get to the maximum allowable multiple of 3x. A lot of data analysis went into creating these premium multiples, and the graph illustrates how much more likely older adults are to need healthcare.

While many states decide to use the federal premium age curve, some want to set their own rules. They’re not allowed to increase the overall premium multiple above 3x for the oldest people in their state, but they can lessen the gap between the premiums paid by the youngest and oldest people in their state or change the multiples for each age. While this makes premiums more equal, it also means younger people will be paying more than they would elsewhere while older people will be paying less.

Want to know more about health insurance in your state? See our state-by-state guide to open enrollment

How older people can get help with their higher premiums

Now that you know how age affects your health insurance premium, you might be wondering if there is any way to help older people pay their higher premiums.

Premium tax credits are one form of assistance that can be used to help pay for insurance premiums. These tax credits are available to anyone who purchases a plan on the health insurance marketplace as long as your household income is below a certain threshold. The Kaiser Family Foundation put together a calculator to help estimate the amount of tax credits you’d be eligible for based on a number of factors.

The thing about tax credits is that they don’t scale by age. Older people won’t necessarily receive a higher tax credit since eligibility is based on household income. If you make too much money, you won’t qualify for tax credits at all.

Another option is a health benefit called the individual coverage health reimbursement arrangement, or ICHRA for short. Using an ICHRA, employers offer employees allowances that are used to reimburse employees tax-free for their health insurance premiums and other qualified healthcare expenses.

These allowances can be scaled based on an employee’s age, with the oldest employees being eligible to receive up to three times the allowance of the youngest employees. The result is similar to the age curves, only employers get to control the floor and ceiling of the benefit. This option takes an older employee’s increased costs into account and is a great way to help them pay for the healthcare they need.

To learn more, download our guide to offering an ICHRA

Your age is the most important factor in determining your health insurance premium, but insurance companies also consider your smoking status and location in addition to the metal tier of the plan you choose and how many people will be covered. In most states, older people pay three times as much as a 21-year-old for their premium. The most effective way to help older people pay for this increase in cost is for employers to implement an ICHRA, which lets employers give their older employees more money than their younger employees to pay for their premiums and healthcare expenses.