The revised Form 720 reassures many businesses and insurance professionals, who were unsure how to report the fees up until now. The first due date of these fees (for some employers) is July 31, 2013.

Additionally, the newly revised instructions provide clarification that for a self-insured health plan (such as a Health Reimbursement Arrangement), employers may use one of three (3) methods to generate the number on the form: Actual Count Method, Snapshot Method, and the Form 5500 Method.

About the PCORI Research Fees

The Affordable Care Act (ACA) includes a "research fee" that plan sponsors, including HRA plan sponsors, must pay on an annual basis. The research fee is referred to as the Patient-Centered Outcomes Research Institute (PCORI), or Comparative Effectiveness Research (CER) fee. According to the ACA, the fee will be used to fund governmental research -- ACA created the "Patient-Centered Outcomes Research Institute" to evaluate the relative effectiveness of various medical treatments and procedures.

The ACA imposes this fee on insured plans and self-insured health plans. The IRS has determined an HRA falls under the "self-insured health plans" definition, since HRAs are technically Section 105 ERISA health plans funded by employers. The types of HRA plans that must pay these fees are HRAs not integrated with an applicable self-funded medical plan. The research fee is temporary; it applies to plan years ending on or after October 1, 2012 and before October 1, 2019.

Applicable employers are required to report and pay the PCORI research fees annually via Form 720, due by July 31 of each year.

How Much is the PCORI Research Fee?

The PCORI fee will be adjusted for each plan year's ending, as follows:

For HRAs that must comply, there is a special rule to only count one covered life for each employee. Thus, a family of four covered by an HRA would result in only a $1.00 fee ($1.00 x the employee-participant only).

How to Calculate the PCORI "Number of Lives"

The revised Form 720 instructions confirm the three ways to count the "number of lives." Here's what the instructions state: 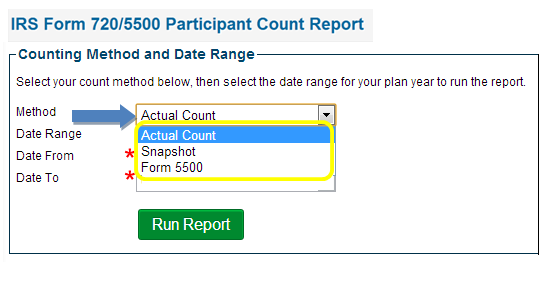