On May 22, Milliman Medical Inc. released their 2013 Milliman Medical Index (MMI). The study provides a unique snapshot of health care costs for an average family of four covered under employer-sponsored health insurance. Instead of just looking at the employer's cost of health insurance or the family's medical expenses, the 2013 MMI takes into account the combinedcost of employer-sponsored health care including:

With health care reform right around the corner, this study provides a benchmark of the combined cost of employer-sponsored health care for employers and employees.

According to the 2013 MMI, the total annual cost of health care to cover a typical family of four through an employer-sponsored preferred provider plan (PPO) is $22,030. Again, this amount includes the employer-sponsored insurance premiums, and the employee's out-of-pocket family medical expenses. 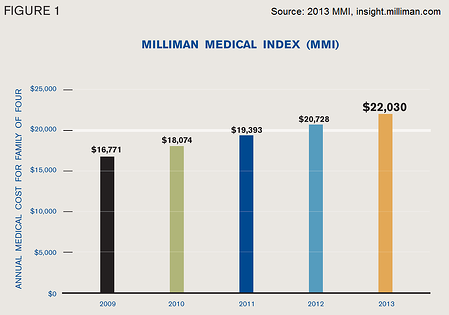 On average, the employee's costs are split between premium-sharing ($5,544) and out-of-pocket expenses such as co-pays, deductible expenses, pharmacy, etc. ($3,600). 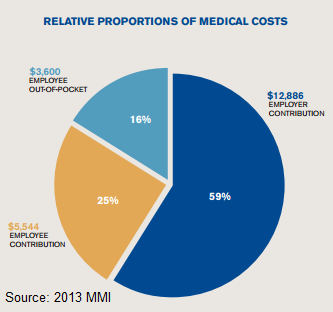 How do these health care costs compare to other family expenditures? The employee's average annual contribution ($9,144) now exceeds the cost of groceries for a family of four ($8,388 on average). And to put it in perspective, the 2013 MMI notes the total cost of health care exceeds the average cost of attending an in-state public college ($22,261).

What about health care reform?

As stated in the report, "The emerging reforms required by the Patient Protection and Affordable Care Act (ACA) will have little impact on the cost of care for our family of four in 2013 because this family tends to be insured through a large group health plan."

Here is the 2013 MMI's interpretation of how health care reform will impact various areas of the cost of health care: