2020 was a lot of things. Clichés were born that labeled these times “unprecedented”, “troubling”, and “uncertain”. While some businesses thrived in “the new normal”, millions of others were struggling to survive or had to close their doors completely.

It took a global pandemic to teach us the value and necessity of having access to quality healthcare. People started talking more earnestly about how to ensure all Americans could get the care they need.

Data shows that while 99% of large firms offered health benefits to their employees in 2020, only 55% of small firms did the same. When you drill down even further to the smallest employers included in the data—those with 3-9 employees—the rate drops to 48%.

Since its creation in 2017, the qualified small employer HRA (QSEHRA) has been the preferred solution for small employers that don’t offer traditional group health insurance to provide tax-free benefits to their employees.

PeopleKeep delivered the first QSEHRA solution to the market and has been in a unique position to report on how these employers are using the benefit. This report will detail how more than 2,500 small employers and their 14,000+ employees used the QSEHRA in 2020, covering everything from average allowance amounts, to the types of expenses being reimbursed, to which optional features they used the most.

Some of the most welcome news from last year was the increase in the average allowance offered to employees. Despite a huge economic downturn, small employers using PeopleKeep’s platform raised the average monthly allowance by 41% in just two years.

The takeaway: employers prioritized their employees’ healthcare needs. They understood their role and responsibility in helping employees access the care they needed, and they cared enough to do something about it.

While smaller employers don’t have the budgets of their larger competitors, they often have outsized hearts. Things aren’t always dollars and cents. Sometimes, decisions are made because it’s just the right thing to do.

The average monthly allowance in every family status category increased from 2019 levels, but the largest increase came for single employees with dependents. Those employees had their average allowance jump from $272 in 2019 up to $352 in 2020—an increase of 29%.

However, when you look at allowances as a proportion of the maximum allowance that can be offered—known as the “allowance cap”— those employees were offered less than employees of any other family status. 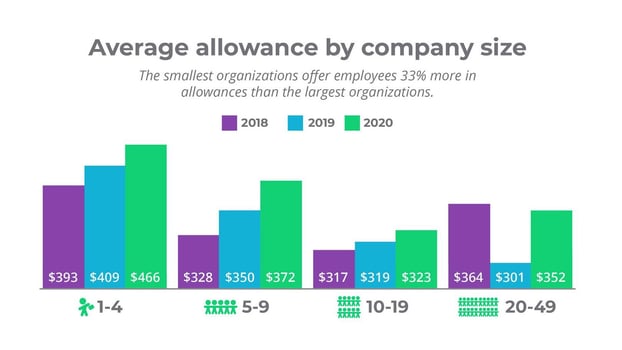 As its name would imply, the qualified small employer HRA can only be offered by small employers—those that employ fewer than 50 full-time equivalent employees.

There are a lot of things that contribute to this outcome, but a couple stand out. First, many of the smallest organizations have one or two specific people in mind when offering a health benefit. Whether it’s a current employee they’re wanting to keep from leaving or a prospective hire they’re trying to bring on, having a health benefit in place—especially one with a larger allowance—can help make their case.

Second, many of our smallest customers are religious and nonprofit organizations who likely place value providing a more generous health benefit to their handful of W-2 employees.

The QSEHRA allows employers to choose which expenses they want to reimburse. This gives employers more control over their costs and lets them tailor the benefit to their own needs.

The interesting thing is that employers offer essentially the same amount in allowances regardless of which expenses are eligible. While limiting eligible expenses to premiums can help to ensure employees buy health insurance, these employers aren’t offering any less financial assistance.

We wanted to see how tenure on the benefit affected the allowance amounts that were offered. What we found was that there is a correlation between the amount of time an organization has been using a QSEHRA and the amount of money they offer their employees.

Our customers who began offering a QSEHRA in 2017—the first year it was available—offered their employees almost 14% more than employers who became customers in 2020. That trend was the same for all subsequent years as well, with allowance amounts increasing the longer an employer has been offering a QSEHRA.

As with anything in life, you usually get more comfortable with something the longer you use it. Employers who have been using the QSEHRA for four years know exactly how it works, how much they can afford to offer, and how much benefit their employees get out of it. Newer customers are still learning all of these things and will refine their benefit design as they learn.

And they will learn and grow with the QSEHRA, as a full 40% of our customers were in their third or fourth year offering the benefit in 2020.

In fact, according to data from the Kaiser Family Foundation, Michigan—number 2 on the list of highest average QSEHRA allowances—had the sixth lowest average premium in 2020, while Connecticut was 10th and Kentucky was right in the middle at 27th. 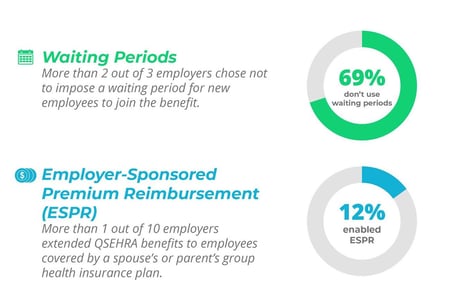 The QSEHRA is all about simplicity, but there are a few options employers have to decide on to make it their own.

The first of these is the option to have a waiting period for new hires before being eligible to participate in the benefit. While implementing a waiting period can save money, it’s not ideal for employees who are left out for up to 90 days.

69% of QSEHRA customers don’t use waiting periods which suggests employers are interested in leveraging the QSEHRA to recruit new talent by placing as few benefit restrictions as possible.

Another customization option is choosing whether to reimburse employees for a spouse’s or parent’s employer-sponsored health insurance plan. While the individual coverage HRA (ICHRA) has more customization options than the QSEHRA, this is one that it lacks and is a selling point for QSEHRA when an employer wants to help out their employees regardless of where they get their coverage.

In 2020, only 12% of our customers—a little more than 1 in 10—enabled this feature, called employer-sponsored premium reimbursement, or ESPR.

Health benefits offering prior to QSEHRA

We dug into our customer data to better understand their health benefits situation before they became a customer.

Almost nine out of every ten customers hadn’t offered a health benefit before. QSEHRA has proven to be the perfect on-ramp to health benefits for small employers looking for a simple, cost-controlled alternative to group health insurance.

The other QSEHRA adopters had either offered a taxable stipend and wanted something tax-advantaged and formalized or were on a group health insurance policy and couldn’t handle the huge annual renewal costs and complexity that comes with that type of benefit.  So, QSEHRA can also act as an off-ramp from traditional group health insurance. 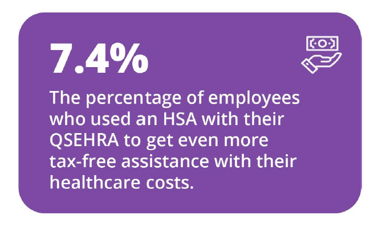 While a QSEHRA is one way to get tax-free money to pay for healthcare expenses, it’s not the only way. Health savings accounts (HSAs) can be coordinated with an employee’s QSEHRA to provide even more tax saving value.

An HSA lets employees contribute pre-tax money to a savings account. As long as that money is used for qualifying healthcare expenses—the same ones that an HRA can be used for—then it can be withdrawn without paying taxes on it.

Only 7.4% of employees are currently using both an HSA and their QSEHRA together. When used together, an employee can maximize the amount of tax-free money they can use for their healthcare expenses.

Average percentage of allowance that gets reimbursed 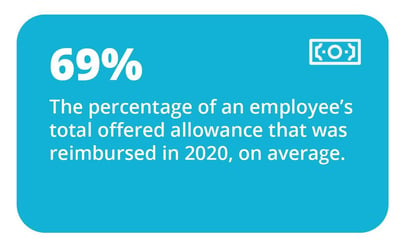 Knowing your maximum possible outlay is one of the best things about a QSEHRA, but it isn’t the whole picture. Not every employee will use their entire allowance, so to get a more accurate sense of what your expected cost will be, you’d need to know how much of their allowance an employee actually uses.

So we crunched the numbers and found that employees were reimbursed an average of 69% of the total allowance they were offered in 2020. That means an employer offering their employees the overall average monthly allowance of $360 would expect to reimburse each employee $248.40 per month.

If you’ve ever had a root canal or a child with braces, you understand how important dental insurance can be. Allowing employees to get reimbursed for ancillary insurance products like dental and vision is a big benefit and can save them lots of money if a big expense comes up.

There’s no shortage of news articles showing the effect that a year like last year had on many Americans. Humans are social creatures, and being isolated from others goes against our very nature. As the stigma of mental health issues decreases and telehealth options increase, it’s not surprising that more people sought out these services.

Since most employers allow reimbursements for both premiums and out-of-pocket expenses, employees have options when using their allowance. We thought it would be interesting to look at the average reimbursement amounts for each type of expense to see what employers can expect when their employees submit expenses.

The average premium expense was $367, which is almost $100 less than the national average benchmark individual health insurance premium in 2020. In general, that would lead to the conclusion that most employees who use their allowance for premiums are likely using their entire allowance to pay for their premium. 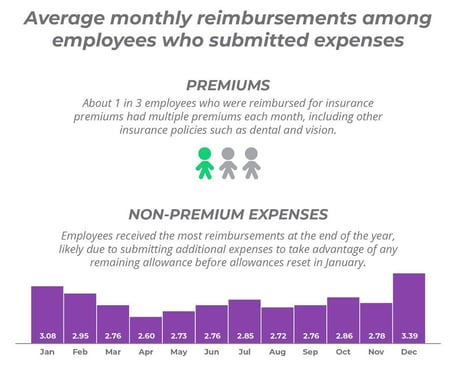 If you look at the chart above, you’ll see an interesting trend. The most non-premium expense reimbursements came at the beginning and end of the year, with another smaller spike in July. That perfectly coincides with the way most of our customers function.

Allowances reset at the end of December, so any unused allowance on December 31 goes back to the company on January 1. The spike in reimbursements in December is from employees submitting any remaining expenses at the end of the year before their allowance resets.

The spikes in January and July can be explained by the beginning of the plan year for our customers. While most of our customers have a fiscal year beginning in January, our nonprofit customers start in July. We typically see higher benefit usage in those months from employees who are eager to try out their new benefit.

The QSEHRA typically appeals to employers who want to provide a benefit to all their employees. While other benefits let them choose who is eligible to participate, the QSEHRA requires all full-time employees to be enrolled.

We’re extremely proud of our customers and their commitment to taking care of their employees.

If you’re interested in learning more about the QSEHRA, read our comprehensive online guide or schedule a call with one of our Personalized Benefits Advisors.