Citing rising costs, Arizona and Hawaii are next in line for federal approval to limit hospital stays for Medicaid members. member stays to 25 days per year starting as early as October 2011, while Hawaii plans to limit stays to 10 days per year beginning April 2012.
Opponents argue that the state Medicaid cuts will:
States argue that the moves are an absolute necessity due to the economic downturn and the end of federal stimulus dollars.


What affect do you think this move will have? 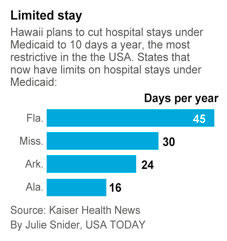