The government's role in Medical I.T.

Medical I.T. is one of the main phrases tossed around when politicians talk about innovation and cost savings.  There's no question that improving the 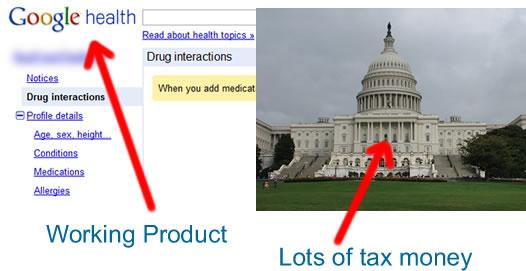 way doctors and hospitals store and share information could have a huge impact, but I wonder if the private sector won't be the driving force behind this change.

I'm going to compare the possibilities of a government led initiative with those of a private solution.  Specifically, I'm going to look at Google Health because I'm an unashamed Google fanboy.  There are hundreds of companies offering really promising medical I.T. services and products, but I'm going to use Google to represent all of those companies.

How the government gets things done:

There would be no point in me acting like I know how the reform bill will work, but mixing common sense with a dash of speculation can lead us to some pretty solid assumptions.

First of all, the government generally gets things done through taxes.  They incentivize people and organizations to act in certain ways by either taxing undesirable behavior or offering tax breaks for the desired behaviors.

Mandates are another big one.  It's likely that by a certain date (let's say the beginning of 2015)  all medical providers will be required to meet some kind of loosely defined standard.

How Google gets things done:

Google is famous for having virtually no traditional marketing or distribution methods.  They also aren't generally swayed by how other people think things should be done.  With search, email, and online advertising, Google basically came up with a great product and assumed that users would adopt it.

What does this mean for Google Health?  It basically means that Google probably has a pretty good idea of how things should work (in their opinion at least).  They will adapt as they learn from experience, but they wouldn't be releasing a product unless they were confident in how it will work.

While the government is worrying about money and mandates, Google can worry about a real solution.

The reform plan will throw a lot of money at certain problems and set some very vague guidelines.  The problem is, it's not the governments job to really suggest specifically how the problem should be solved.  They just hand money out and hope that by the date they set, everyone has figured it out on their own.

Google, on the other hand, is able to start with the solution and worry about the money later.  If a user signs up for Google health, they don't see guidelines or suggestions.  They see a thought out application that tells them how to manage their health records.  They then take that to their doctor who has to start supporting Google's system.

This model didn't work 20 years ago because a company like Google had no distribution without the internet.  Today, a good idea can spread across the entire country in a matter of hours.  We don't necessarily need a massive national initiative to bring about rapid and lasting change.

I don't believe that real health reform can be achieved without government intervention, but medical I.T. is one area where the government is seriously out gunned by any number of individual companies.