What can we learn? Here's what they found: 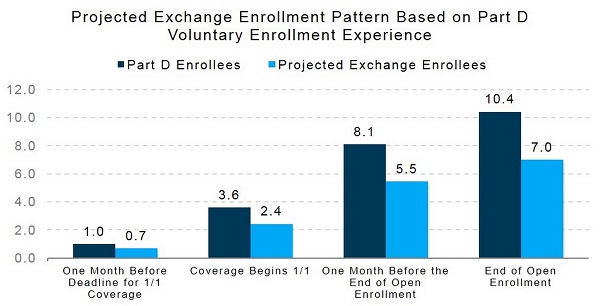 In late October the federal government announced that 700,000 people nationwide had submitted applications for coverage in the new health insurance exchanges. Using Medicare Part D as a historical benchmark, only 10% of voluntary Part D enrollees in stand-alone plans had enrolled in coverage as of December 2005, a month before drug coverage first became effective. If the Part D enrollment experience is applied to exchanges, fewer than 700,000 people would be expected to enroll in exchange coverage by November 15, 2013. At the time of analysis, an unknown factor was what portion of the 700,000 applicants will complete their purchase and enroll in a plan. This week it was released that approximately 50,000 had enrolled in coverage in the federally-run individual health insurance exchanges.

It is noted in the analysis that the two health insurance programs are very different in nature. Medicare beneficiaries already had health insurance and were only looking to add drug coverage. This could explain why the exchange applications are coming in more quickly than Part D, despite technical website glitches. Many people have historically been excluded from the individual health insurance market and those who are receiving large subsidies have strong incentive to sign up early for exchange plans.