On August 16, 2013 the Colorado Department of Insurance (DOI) released the final health insurance plan rates that will be offered through the Colorado Health Insurance Exchange.

The Colorado DOI approved 541 new health insurance plans from 18 carriers to offer coverage to individuals/families and small businesses starting January 1, 2014. These include plans that will be offered on the exchange, and off the exchange. (For background, see this article on the proposed rates for the CO Health Insurance Exchange.)

The monthly premium rates for the plans offered on Colorado's Health Insurance Exchange, called "Connect for Health Colorado," will vary widely by type of coverage selected and location.

Regarding coverage, all plans will be offered in four metallic tiers of coverage: bronze (60% of costs paid by the plan), silver (70%), gold (80%), platinum (90%) and catastrophic. Catastrophic coverage will only be available to individuals under 30, or those 30 and over who meet certain financial eligibility requirements. However, within each tier of coverage the plans will vary by deductible, co-pays, and out-of-pocket maximums. Regarding location, plan premiums will vary by geographic region.

However, it's important to note that those eligible for the individual health insurance premium tax subsidies may see an additional discount. If eligible, the subsidies will cap the cost of health insurance at 2% - 9.5% of household income, if household income is up to 400% above the federal poverty line (FPL). That's equivalent to an individual making up to ~$45,900 in 2014. 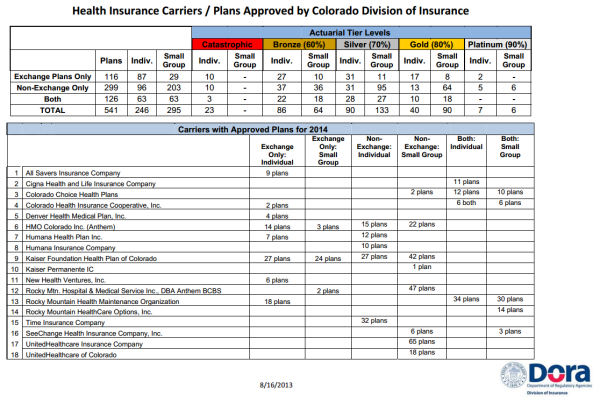 What do you think about the Colorado Health Insurance Exchange final rates? Leave a comment below.